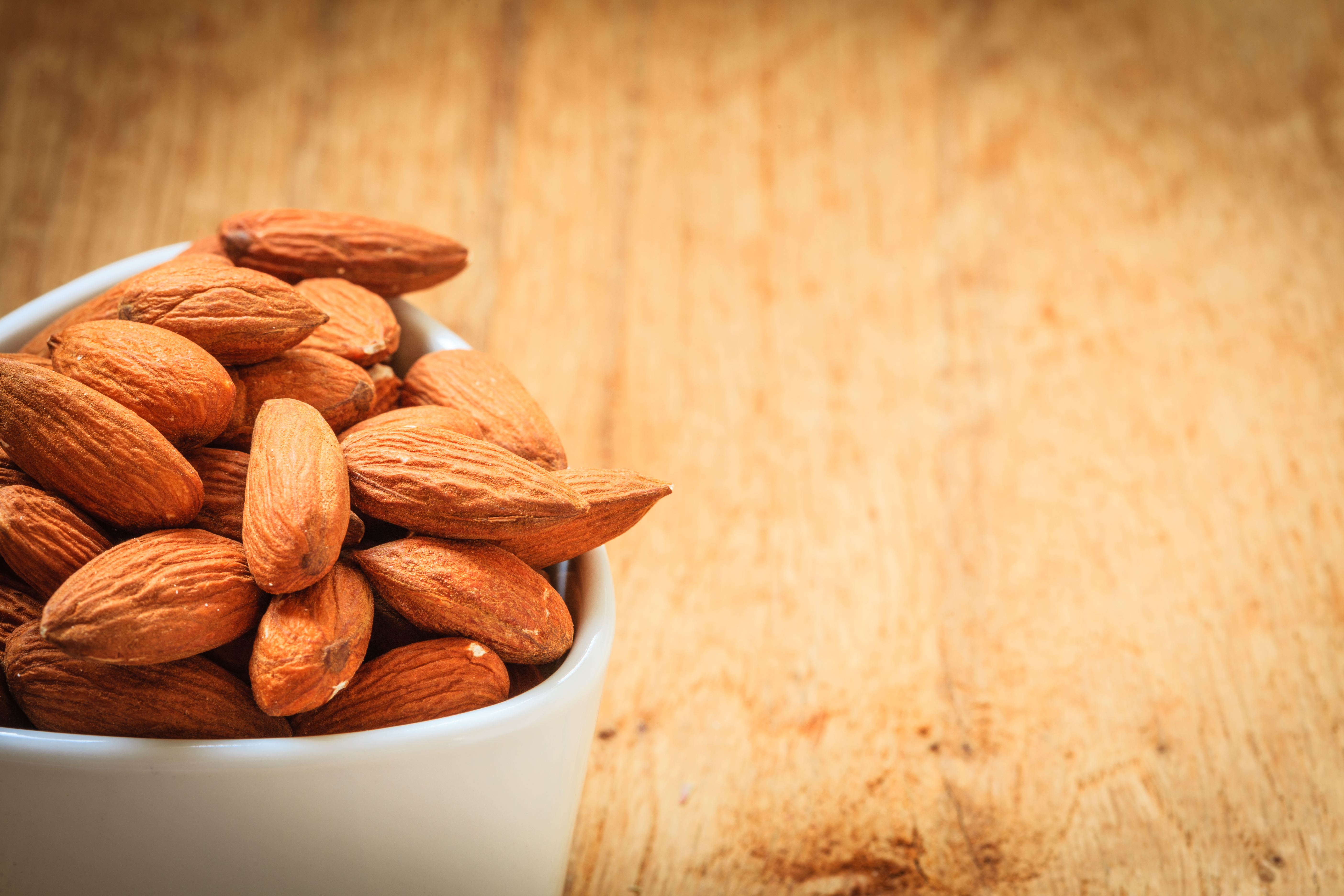 Almonds have been prized since ancient times as one of humankind’s most beloved nuts. They were popular in the diets of ancient Egyptians and Indian populations. Ancient Indian Ayurvedic practitioners even believed that almonds were capable of increasing brain capacity, intellectual ability and longevity.

Today, almonds nutrition benefits are praised around the world, and they are used in numerous different ways: eaten raw as a healthy snack; as the base ingredient in almond butter, almond milk or almond flour; and even in many body lotions and fragrances.

And don’t fear the fat in almonds — almonds are actually beneficial when it comes to losing weight, despite their higher calorie content. One study even found that almonds consumed as snacks reduce hunger and desire to eat later in the day, and when dieters eat almonds daily they reduce their overall calorie intake. (1)

Almonds Nutrition: The Facts Behind the Benefits

Botanically, almonds (scientifically termed Prunus dulcis) are actually very small stone fruits in the Amygdalus family and related to other fruits that contain hard pits, including cherries, plums and peaches. Almonds are a type of drupe nut, which means along with other nuts like macadamias, pecans and walnuts, they have multiple layers that enclose a single, hard seed in the center.

Almonds are considered dry drupes so they first must be extracted (which is called “shelling”) before being sold and eaten, which is why you might see the description “shelled almonds” when you purchase ready-to-eat almonds.

In the medical world, almonds nutrition is most praised due to the presence of monounsaturated fatty acids, dietary fiber, antioxidants, vitamins like riboflavin, and trace minerals such as magnesium. (2)

Although almonds are high in calories and considered “energy-dense” (as all nuts are), they provide a whole range of critical nutrients and chemical compounds that often lack in the standard American diet (sometimes called “SAD”).

¼ cup of almonds nutrition provides about: (3) 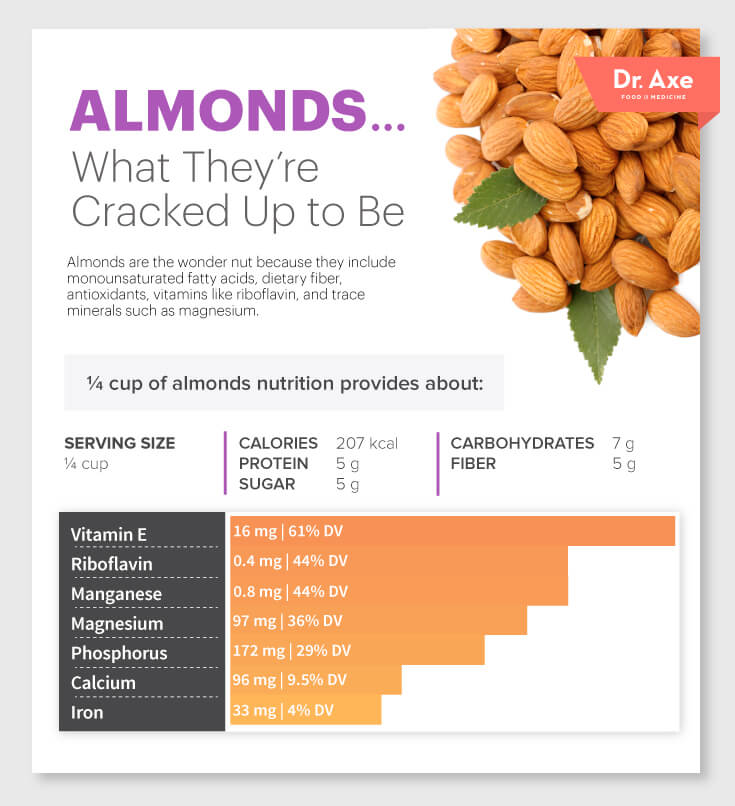 Almonds are often considered one of the best brain foods. Almonds nutrition is somewhat unique in that almonds contain riboflavin and L-carnitine, two key nutrients capable of positively affecting neurological activity and preventing cognitive decline. This is one reason why adults, especially the elderly, are encouraged to eat nuts several times per week — since they are associated with a reduction in the risk for inflammation that can cause brain disorders including dementia and Alzheimer’s disease.

Almonds are a great source of vitamin E and other antioxidants that nourish the skin and reduce signs of aging. Research finds that almonds nutrition contains high concentrations of catechin, epicatechin and flavonol antioxidants, including quercetin, kaempferol and isorhamnetin — compounds that fight skin cancer and damage by reversing oxidative stress from a poor diet, pollution and UV light exposure. (5) Almonds’ healthy fats, plus their ability to improve circulation, also help keep skin hydrated and better able to heal wounds.

Almonds’ rich supply of MUFAs helps slow the rate at which glucose (sugar) is released into the bloodstream. In addition to managing blood sugar and preventing insulin resistance (which can occur over time when the body becomes less reactive to insulin, the sugar-controlling hormone), almonds nutrition benefits include the ability to lower other common diabetes risks: unhealthy body weight, inflammation and high levels of oxidative stress.

Healthy fats and dietary fiber aid in weight loss because they help you feel full, which curbs overeating and unhealthy snacking. Although nuts are high in fat and calories, they prolong the feeling of satisfaction after you eat and keep your blood sugar more stable than low-fat meals do. Thus, you’re less likely to experience a roller-coaster of energy dips and food cravings.

Studies, such as the Nurses’ Health Study, even show that almonds support a healthy metabolism. Also, people who frequently eat almonds and other nuts retain healthier body weights and lower rates of obesity over time compared to those who avoid nuts. Other studies show that when dieters eat almonds daily, they are less likely to overconsume carbohydrates and more likely to reach and maintain a healthier body weight. (6)

For example, one 2003 article published in the International Journal of Obesity found that when women consumed almonds over a six-month period, compared to other women who didn’t eat almonds, they experienced greater reductions in weight/BMI, waist circumference, fat mass and systolic blood pressure.

The body needs adequate amounts of fat in the diet in order to properly absorb “fat-soluble” nutrients, like vitamins A and D. Almonds are also considered one of the only nuts that help alkalize the digestive tract, reducing acid buildup and balancing the body’s pH. A healthy pH level is crucial for proper digestion, immunity and disease prevention. Additionally, the nutrients present in almonds may help regulate digestive enzymes that are involved in nutrient extraction, cholesterol synthesis and bile acid production.

In addition to healthy fats and alkaline-forming molecules, almonds (especially the skin of almonds) contain probiotic components that help with digestion, detoxification and healthy bacterial growth within the gut flora — a key to actually utilizing nutrients from food and preventing nutrient deficiencies.

Studies suggest that almonds and almond skins may lead to an improvement in the “intestinal microbiota profile,” meaning the intestine’s bacterial activities improve and promote numerous health benefits due to the presence of prebiotic properties, the precursors for probiotics.

A 2014 study by the Institute of Food Science & Technology in China found that when women ate a daily dose of 56 grams of almonds over an eight-week period, significant increases in the populations of healthy bacteria called Bifidobacterium and Lactobacillus were observed. (7)

8. Can Help Fight Cancer and Inflammation

Almonds contain gamma-tocopherol, a type of vitamin E that acts as a powerful antioxidant, fighting free radical damage and oxidative stress that are linked to cancer. Many studies find a link between nut consumption and cancer prevention, including a reduced risk for colon, prostate and breast cancers. (8)

Almonds are a good source of trace minerals, including magnesium and phosphorus, which is a crucial nutrient for building and maintaining strong teeth and bones. Almonds nutrition benefits include the ability to help prevent tooth decay, fight cavities, lower the risk for bone fractures and fight osteoporosis.

Would you believe that today the almond industry is estimated at $4.3 billion annually and over 2 billion pounds of almonds are produced worldwide each year? Unlike many other nuts and fruits, the U.S. — specifically California, which is actually the only state to produce almonds commercially — is the largest producer of almonds, producing about 80 percent of the world’s almonds.

Almonds might be growing in popularity every year as research reveals more about almonds nutrition benefits, but almond consumption actually goes back thousands of years to around 4,000 B.C. The almond tree species is native to the Middle East and South Asia. A tall tree with pink and white flowers, it grows in warm and dry climates, which is why it spread through the Mediterranean region and became a staple in the diet there.

Wild almonds are actually bitter and naturally contain toxic substances like deadly cyanide, so humans had to first find a certain type of “sweet” almond among the many different almond tree species before domesticating them. In India and Pakistan, almonds have been a mainstream part of the diet for centuries, where they’re called badam. Almonds were first spread by humans in ancient times along the shores of the Mediterranean into northern Africa, Asia and southern Europe, eventually making their way to the U.S. Along the way, the word “almond” was given to the nut, which comes from the old French word almande.

Historically, almonds have meant many things to various cultures. Hebrew literature from 2,000 B.C. mentions almonds, as does early literature from Turkey, Romania and the Baltic peninsula. The Bible also makes numerous references to almonds, describing them as an object of value and a symbol of hope, for example, in Genesis 43:11.

King Tut also took several handfuls of almonds to his grave dating back to 1352 B.C., and years later almond trees were believed to grow near trade routes like the famous Silk Road that connected central China with the Mediterranean.

How to Buy and Use Almonds

Not all almonds are created equal — you definitely want to avoid almonds and any nuts coated in sugar, hydrogenated oils and tons of sodium. Many nuts undergo processing that lower the nut’s health benefits. For example, by heating nuts to very high temperatures, some of their antioxidants can be destroyed.

One downside of consuming almonds produced in the U.S. is that United States law demands that all raw almonds be pasteurized or irradiated before being sold to consumers. According to the Department of Agriculture (USDA), there are several mandatory pasteurization treatment processes to reduce the level of potential contamination in almonds “without diminishing the product’s quality, nutritional value or sensory qualities (taste and crunch).” (9) These include: oil roasting, dry roasting and blanching, and steam processing.

Almonds contain natural fatty acids and oils that are sensitive to high heat, so when they’re highly processed it’s possible to turn these oils “rancid.” For example, when almonds are roasted, they’re usually soaked in hydrogenated or GMO oils, a fat that’s harmful and promotes heart disease.

As a rule of thumb, the less processing done to almonds the better. Preshelled and roasted almonds are likely less beneficial than raw almonds still found in their natural casing.

One step that can actually increase the nutrient content of almonds is soaking and sprouting them. Soaking and sprouting almonds removes some of their naturally occurring antinutrients that block the body from absorbing some minerals. I like to soak mine overnight for 12–24 hours in a big bowl, covering them with water and rinsing them the next morning.

Almonds come in two varieties: sweet and bitter. Sweet almonds are used in many recipes in Asia, the U.S. and the Mediterranean. One popular use in Italy is to crush almonds into marzipan, which is used as a sweet ingredient in baked goods. They’re also added to stir fries, used to make almond oil for cooking and produce almond extract that makes a good stand-in for vanilla extract.

Additionally, oils from sweet almonds are extracted to form almond essential oil, a beneficial oil with many healing body and household uses.

How About Almond Butter or Almond Flour?

Both are great options for adding more almonds nutrition into your diet. Almond butter is simply ground almonds, but look for butters that contain no added oils or sugar. Your best bet? Make almonds yourself by grinding them in a high-speed blender or food processor until smooth.

When it comes to almond flour (also called almond meal), again look for simple and straightforward ingredients, usually just almonds. Use almond meal to replace bread crumbs, and combine it with other gluten-free flours or coconut flour to make baked goods. 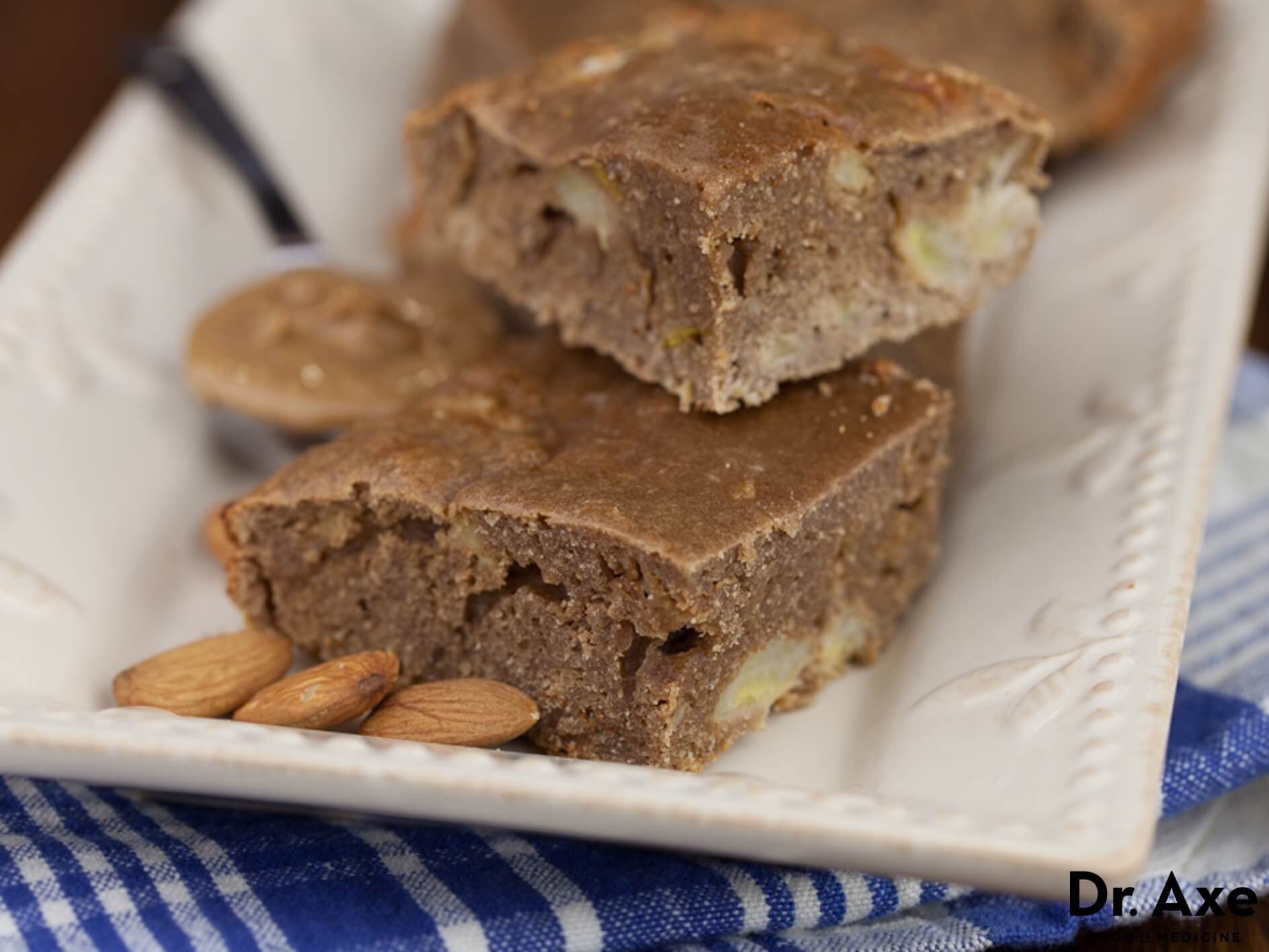 You can also take advantage of almonds nutrition by making some of these healthy and easy recipes: